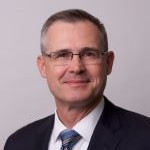 Wayne brings a clarity of purpose to our business every day – an unwavering commitment to serve our people as they serve the Nation’s most critical facilities. His relentless pursuit of performance excellence for the customer grows from his confidence in the expertise of our people, the disciplined and systematic approach of our company, and the weight and support of the entire EMCOR Government Services’ team.

Wayne focuses on EMCOR Group’s values of Mission First, People Always to ensure that we operate in such a manner that we earn the customers’ trust every day through integrity, transparency, discipline, safety, respect, and teamwork.

Much of Wayne’s business, leadership, and operations knowledge stems from his 30 years of service in the U.S. Army, of which he served over 15 years in the facilities management and government contracting space. He served in key Army installation management roles at Forts Myer/McNair in Washington D.C., three years leading the garrison team at Fort Leavenworth, KS and four years as the Chief of Staff of the United States Military Academy at West Point.

Wayne and his wife Tara are the proud parents of four awesome children. While he is not sharing experiences with his family, Wayne loves learning about American history and cheering for his Army football and rugby teams!