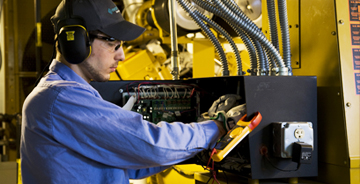 The staff did an exceptional job preparing the facilities and grounds for the event; they were also commended for their professionalism in front of the most senior Coast Guard, government, and industry leaders. Most notably, the staff's performance contributed to EGS' client being presented with the Commandant’s coin, a very special honor in the military to recognize a job well done. Bravo Zulu!

"I wanted to take a moment to commend you and your staff for their outstanding job maintaining access to all of FDIC’s owned headquarters building over the past five days. I know many of your staff worked long hours under extremely difficult conditions to maintain our walkways and driveways free of snow and ice. All of our headquarters buildings were accessible to employees and contractors during the blizzard, which is an amazing feat."

"Your staff’s outstanding work clearly demonstrates EMCOR’s commitment to providing exemplary service to FDIC and I am very appreciative of their efforts. In your own special way, EMCOR has helped FDIC to become, and remain, the Best Place to Work in the federal government."

"Thank you for your hard work and leadership. Please express my appreciation and gratitude to your staff."

In the facilities industry, we know that there's no sure-fire way to prevent every surprise or emergency. The best safeguard is being vigilant and well prepared.

That's exactly how one of EMCOR Government Services' operations and maintenance teams handled the aftermath of an office device fire that impacted two floors of the Health and Human Services (HHS) headquarters in Washington, DC.

Their quick action and around-the-clock effort to remediate extensive smoke, fire and water damage over the Christmas weekend enabled government employees to be back at their desks just days later.

"I am taking a moment to share our sincere thanks for EMCOR’s support in federal property remediation from a fire in the [Hubert H. Humphrey] Building Saturday, December 26. An office device overheated and caught fire on the 8th floor, triggering one of the building sprinkler heads to activate. While we are thankful there were no injuries, the property suffered extensive water damage on two floors that impacted 40+ work stations.

"Today, I’m extremely pleased to report that most staff members are able to return to their workstations, with confirmed indoor air quality results that meet or exceed all known standards.

"This would not be possible without EMCOR’s immediate action, including its rapid response to work under an emergency notice to proceed from HHS on the 26th. Led by EMCOR management team leads Jay Jenkins and Mike Gardner, the EGS team and its subcontractors worked around the clock the day after Christmas and several days after, activating resources as appropriate to remediate water, smoke and fire damage. This critical portion of the restoration was completed within a remarkable timeline of just 9 days.

"Please extend our thanks to Jay, Mike and the EMCOR team for their effort and determination in support of our mission."

We at EMCOR congratulate our HHS-based team on another job well done!

EMCOR, PWD Washington Save the Day at USNO

"This February we felt the Arctic Blast at the Naval Observatory, which is located in Northwest Washington DC. Our Base Operating Support (BOS) Contractor, EMCOR Government Services, has been instrumental in keeping the water flowing!

This is meant in the most literal way. Over the long President’s Day weekend a 50 foot section of copper piping located underground in a large tunnel was found frozen solid. This left a historical administrative building without running water.

During a routine building inspection the next Friday following this event, an EMCOR technician noticed several feet of standing water in an underground tunnel. Once again the BOS contractor had to act quickly to avoid costly damage to the basement of Building 1, which contains electrical and mechanical equipment.

The leak location was identified and the team began pumping the water from the tunnel so they could begin the water line repair. Several water valves had to be shut‐off in order to bypass this pipe and to make the repair. Thousands of dollars of costly repairs were avoided by facilitating building inspections and by quickly identifying and addressing facility issues.